We are currently closed outside of special events. See our calendar for more details. Visitors are appreciating our safety measures at the Atwood Museum. Here is a recent review:
“Awesome, Safe Experience”
“Our trip was so easy to book! The museum has many unique items that give a sense of what life in Chatham used to be like. I really enjoyed the Native American sections, which reminded me how long people have been living and working in Chatham! The whole place is clean, and I felt very safe walking throughout the whole museum. The covid procedures do not take away from the experience at all!         I can’t wait to come back!”

Become an active member for easier and more convenient processing.
Private Access allows exclusive visits to the Museum Exhibits without other visitors.

Exhibits returning this year include:
– A WETU – A Wampanoag Dwelling built on our grounds
– The Turning Point Commemorating the Mayflower Arrival and the Wampanoag Community
– Remembering Our Heroes – WWII 75th Anniversary
Check out the new costumes and textiles in the Old House

Get our free monthly newsletter and periodic updates.

Learn more about our Museum in under two minutes: here.

A Wetu – Wampanoag Dwelling – Come see the completed Wetu at the Atwood: 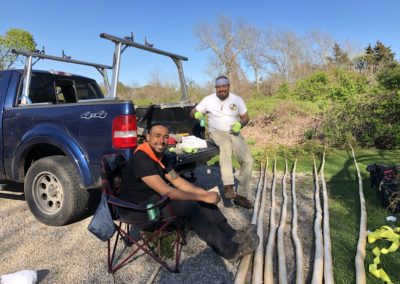 About the Chatham Historical Society

The Chatham Historical Society was organized in 1923. Three years later, the society acquired the Atwood House – a gambrel-roofed house built in 1752. Except for the addition of essential electricity, the old Atwood House is unchanged from when it was built and is furnished throughout as it was during the 18th and 19th centuries.

Over the years, museum galleries have been added to the original structure without affecting its integrity. As a result of the major expansion and renovation to the museum completed in 2005, there are now eight galleries with permanent exhibits, plus a large special exhibit gallery that doubles as a meeting room seating up to 100 people.

On the grounds are the mid-20th century Nickerson North Beach Camp, the Chatham School Bells display, and the Chatham Light Display, featuring the lantern house from Chatham’s twin light with its original Fresnel lens, which flashes its beam whenever the museum is open.

The reception room of the museum houses a unique gift shop featuring tasteful gifts, books, and fashion accessories that relate to our collections. It is not necessary to pay admission to visit the shop. Read more…

The mission of the Chatham Historical Society is to inform and educate present and future generations about the history and culture of Chatham and vicinity by collecting and preserving records of earlier generations and by exhibiting and interpreting art, artifacts, archives and places of historical interest.